After recently watching The Jungle Book, I realised that Baloo is meant to be a sloth bear (Melursus ursinus) and his lovable character inspired me to make this post. This shaggy, insectivorous bear is native to the Indian subcontinent where it lives in a range of habitats. Their coat is black with a white ‘v’ shaped line across their chest.They use their huge claws to open termite mounds, letting pandemonium ensue and quickly sucking up the panicking insects like a vacuum. Their diet also includes flowers and various fruits; they will even knock down honeybee nests and feast upon the delicious honeycomb (just like Baloo loves to do). They are a solitary species, usually active at night, and can grow up to 6ft (1.8m) in length. 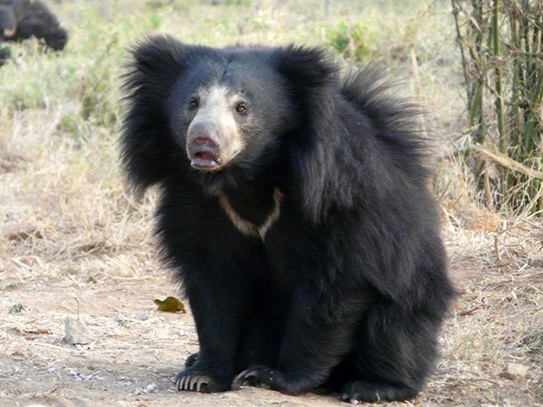 Sloth bears have been exploited as dancing bears since the 13th century; it used to be a form of popular entertainment in India. Dancing bears lived a harsh and unhealthy life. Their teeth were knocked out at the age of one and they were often fitted with a nose ring attached to a leash to prevent harm to the public or their slavers. Some dancing bears were found to be blind from malnutrition. Sloth bear cubs were taught to dance from as early as six-months old. A ban on this practice was enacted in 1972 but the ban was not properly enforced since hundreds of dancing bears were still enslaved on the streets on India during the late 20th century. Thankfully, after a seven-year campaign by animal welfare groups, the last dancing sloth bear was set free in 2009. However, the devastating effects of this tradition are still, at least partly, responsible for their vulnerable status.

The sloth bear is also threatened by habitat destruction and hunting – humans have drastically reduced their population by hunting them for food and their large claws. Bizarrely,  they were also hunted for their baculum (the penis bone found in many placental mammals, although this bone is absent in humans) because some Sri Lankan people used it as a charm against barrenness. Today, many farmers also kill these vulnerable mammals due to their occasionally aggressive behaviour and for the destruction of their crops. Fortunately, now there are many conservation charities and projects, such as the Sloth Bear Welfare Project, which aim to protect sloth bears and prevent their exploitation for human entertainment.

One thought on “The Sloth Bear”