Extinct in the wild, the Alagoas curassow (Mitu mitu) is a species of bird which used to be found in forests across northeastern Brazil but now they can only be found in captivity. This pheasant-like bird was last recorded in the wild in the late 1980s. There are around 130 individuals, split into two separate captive populations. 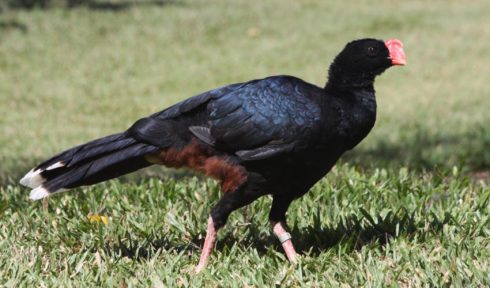 They have a glossy, black plumage with a dark, blue-purple hue. The tips of their feathers are brown in colour which gives them their chestnut-coloured underbelly. They also have a large, bright red bill which it uses to consume a diet of fruit and nuts.

In 2000 there were only 44 alagoas curassows but now there are over 130 individuals. However, it is estimated that 35% of these birds are hybrids with razor-billed curassows (Mitu tuberosum). A reintroduction plan is being organised but there are many potential problems due to this species’ massively reduced gene pool and there are human threats (for instance, deforestation) which have limited possible reintroduction zones.

Alagoas curassows have been eliminated from the wild due to deforestation in northeastern Brazil since forests were destroyed to make way for sugarcane plantations. Pesticides used in sugarcane fields had a detrimental effect on their remaining habitat, and hunting also played a part in their demise. Deforestation and poaching almost led this bird to extinction and illegal hunting would be another concern if they were reintroduced into the wild. It is deeply saddening to think about how humans have caused this bird to become extinct in the wild but hopefully we can learn from this tragedy and one day allow this bird to roam freely through the lowland forests of Brazil once again.