A truly primitive bird, the southern cassowary (Casuarius casuarius) is the second-heaviest and third-tallest living bird (after the ostrich and emu). This species is both beautiful and fierce. They have a stunning lightning blue head and neck with a huge, dark, black plumage, as well as two powerful three-toed feet – each with claws up to 12 centimetres in length. Their thick skinned legs and dagger-like talons cause me to view this bird as a modern-day velociraptor. They also have a brown, horn like casque but the function of this casque is debated. Perhaps it is used as an accessory in order to attract a mate, or as a digging tool, or maybe it is simply a protective helmet.

This particular species is the most widespread of its family. endemic to a range that extends through New Guinea and Northern Australia. Their diet consists mainly of fruits which they find upon the rainforest floor, however, as an omnivore, they will also eat insects, fungi and some small vertebrates.

The southern cassowary also plays a vitally important role within the ecosystem. Due to its fruit-based diet (including some fruits which are toxic to other animals), the cassowary is able to disperse plant’s seeds throughout its rainforest habitat which helps to maintain a stable community.

Although they are listed as ‘least concern’ by the IUCN Red List of Threatened Species, the Australian population is classified as endangered since they only occupy a small range of Northeastern Australia. Unfortunately, the southern cassowary is threatened by habitat loss, road building, hunting, roadkill and feral animals (which eat their eggs).  Conservation efforts are being made to help protect this species, particularly the Australian population, but these efforts also require human co-operation. For instance, people who live nearby or visit their habitat should drive carefully to avoid hitting this bird and should ensure dogs are kept on leads whilst in their range. 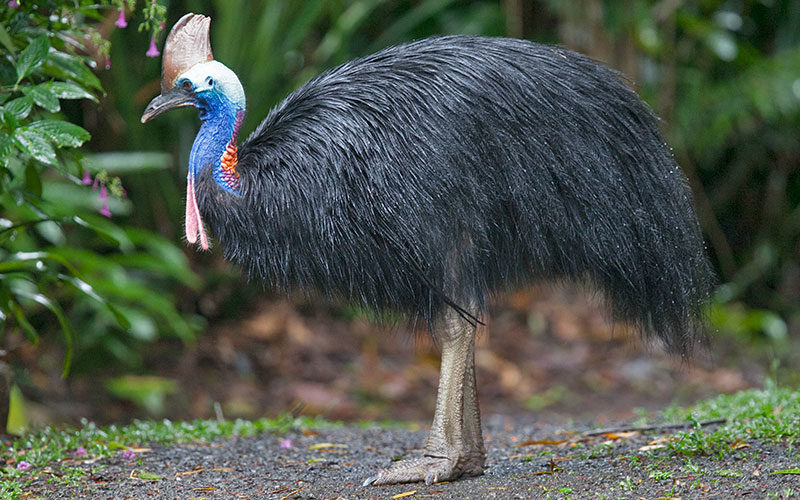 One thought on “The Southern Cassowary”