With fewer than 240 individuals, the gharial (Gavialis gangeticus) is a critically endangered crocodilian which is endemic to the Indian subcontinent. This species has an olive-green body and a long, slender snout with rows of sharp teeth which it uses to catch fish (the gharial’s main prey). 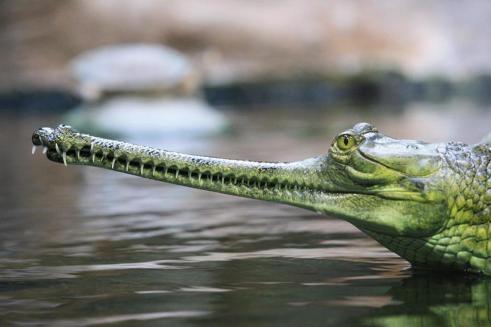 This reptilian once inhabited a vast area of south Asia but the gharial’s distribution has been drastically reduced because of habitat loss, a depletion of fish supplies and they are often caught and entangled in fishing nets.

The gharial is cold-blooded – like other crocodilians – so spends most of its day basking in the sun around rivers. Adult males can reach up to 6 metres in length whilst females don’t usually grow past 4 metres.

As with many of today’s species, the gharial faces extinction and needs conservation in order to survive. The gharial is a beautiful and unique species; its long snout and razor sharp teeth are a testament to the wonders of natural selection.

However, their population is rapidly declining and their struggle will only get worse as India’s human population rises and their natural habitats are destroyed to make room for new houses, farms or industries. I hope this post widens our awareness of this spectacular creature and that the gharial’s population can be improved through conservation projects such as the National Chambal Sanctuary in northern India.

3 thoughts on “The Gharial”